Chichester City Colts Reds and Whites used to be two teams originally, but both sets of managers had to step aside, meaning 24 players would have no team at all.

They are all good friends so Ryan Robinson (LBC South) and Nathan Agate stepped in to manage them as one team. The new team had seven players starting out, with some leaving. Then from the red team, 12 players came over. They had so many players but managed to get them training and playing some games.

After talking to some parents and getting new players join they decided to split them back into two teams, so they will play this season as under-12s Reds and Whites. The boys really love training, which they do as one group, and have been telling their friends about it, which meant an overload of players.

Not only are they enjoying their football again, they are also learning life skills and improving their ability. 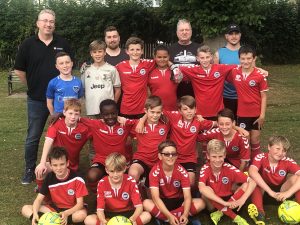 Chris Wigley (Managing Director) and Steve Brown (Office Manager) have attended games and are happy seeing all the boys enjoying the sport.

Good luck to the team for the coming season from all at LBC.

This story was first covered in the Chichester Observer.